Maurice Ravel published his famous piano piece Jeux d’eau in 1901. For the 1902 premiere Ravel insisted on the inclusion of a verse by the French poet Henri de Régnier in the program, a quotation that can also be found on Ravel’s autograph. The inscription is the fourth line of Régnier’s sonnet Fête d’eau ("Water Feast"): "Dieu fluvial riant de l’eau qui le chatouille" ["River god laughing at the water which tickles him"]. The sonnet is from the collection La cité des eaux (The "City" of Waters ["cité" may sound more civilized than "city"]). As this anthology of sonnets was published in 1902, we cannot be sure if Ravel perhaps was inspired by an earlier unpublished version of the sonnet, or if the artists discovered a striking similarity between their visions, both conceived independently. Ravel was also influenced by Liszt’s Les jeux d'eaux à la Villa d'Este whereas Régnier took his inspiration from another famous fountain, the fountain of the goddess Latona (Leto) in Versailles. Nevertheless, Régnier’s sonnet is certainly related to Ravel’s sound poem and as a piano teacher I wish I could show my students the sonnet. No English translation—of course—did I find, no translation into any language, as a matter of fact.

I am aware that it must be regarded as the height of hubris for a German pianist (living in Taiwan) to attempt an English verse translation of a French sonnet, but… [I should offer you my sincerest excuses and apologies, but I rather offer you the translation]: 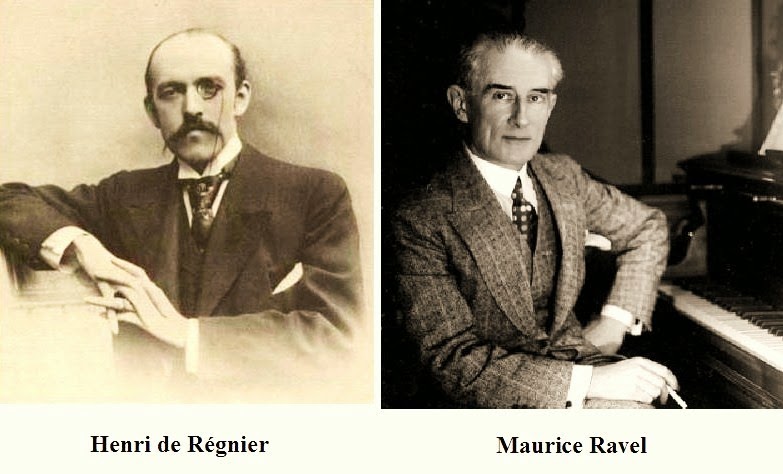 The dolphin, the triton and toadfrog obese,
With diamond gold-spume nude Leto bedeck,
Deity of oceans on tortoise’s back,
River god laughing at watery tease;

The bowl which now hollows as layers decrease,
The moistening spout, now swelling now slack,
And watery dust dyes the monument’s neck
Where foams cast their pearls or the rusting release.

All water delight, all of crystal and joy,
Which laces, laughs, scatters its powdery toy,
Fell silent at dusk in the magical green;

And there in the silence a spouting, you see
Around the calm basin’s now mirror-like sheen
The fountains of yew and of cypress tree.


Ovid, Régnier, Ravel and the Art of Metamorphosis

Latona, known as Leto in Greek mythology, is the nude goddess tickled by the water fountains in Régnier’s poem. Régnier’s sonnet is inspired by the magnificent "Latona Fountain" in the Latona basin close to the Palace of Versailles in France. The fountain, desired by Louis XIV, and produced between 1667 and 1689, is based on the legend of Latona as related by Ovid (43 BC – AD 17/18) in his Metamorphoses: Leto (Latona), mother of Artemis and Apollo (twins fathered by Zeus), was wandering with her newborn children through Lycia attempting to quench her thirst in a pond. The mean peasants forbade her to drink, muddying the waters even, and Leto, quite nonchalantly, turned them into frogs. This story is known as the "Lycian Peasants" and here is Ovid’s description of the metamorphosis (and I magically transformed the Latin hexameters into English ones):


"Their voice, as well, is now hoarse; their throat quite bloated and swollen;
and likewise dilated through constant vituperation their jaws.
Their shoulders unite with their head, their neck appears to be missing;
green is their backbone, the belly, their largest appendage, is white.
These fresh ones, though muddied, they jump in the depth of the water—frogs." 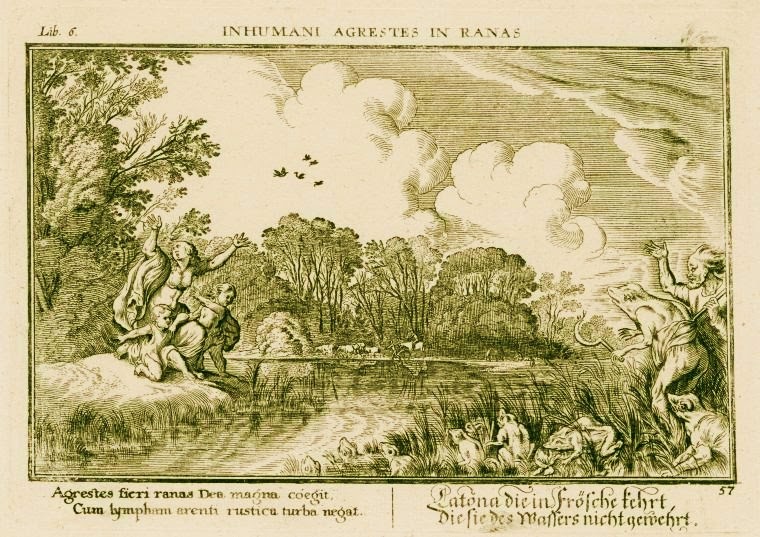 We know about kissed frogs turning into princes, and some princes, unkissed, may turn back into frogs. The scene of nasty peasants transformed into frogs by a seductive goddess, partly disrobed in order to drink water, verily has an evocative power and thus been depicted in books as well as by famous painters.

The Latona Fountain, itself having "metamorphosed" from a flat "frog fountain", 1667, into a multistoried "wedding cake" pyramid, 1689, 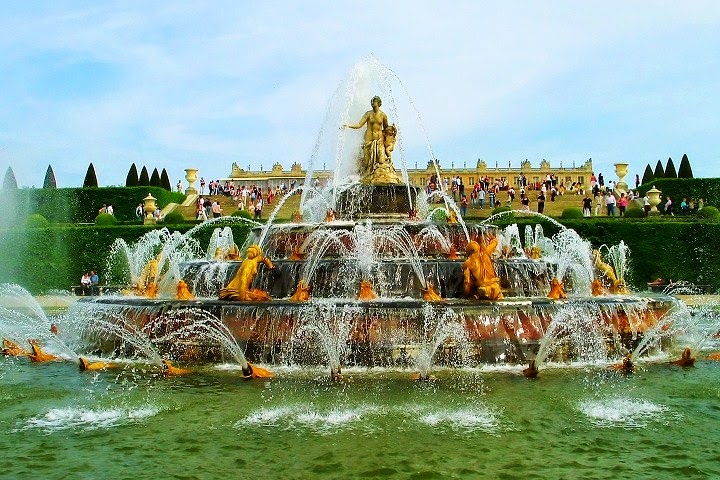 places the nude goddess right onto the top layer 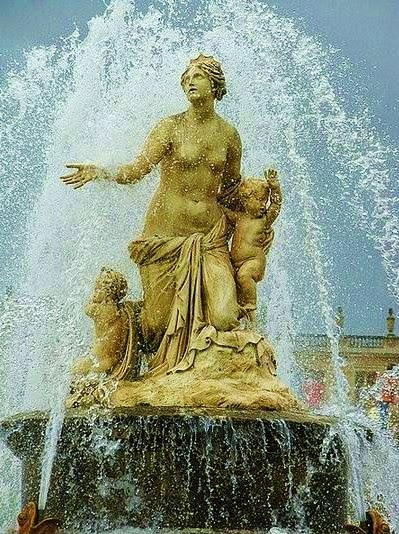 and lets the frogs and peasants in the process of being "frogged" spit their water jets at Latona: the nasty abuse of the peasants and the cruel poor goddess have turned into an enchanting water feast. 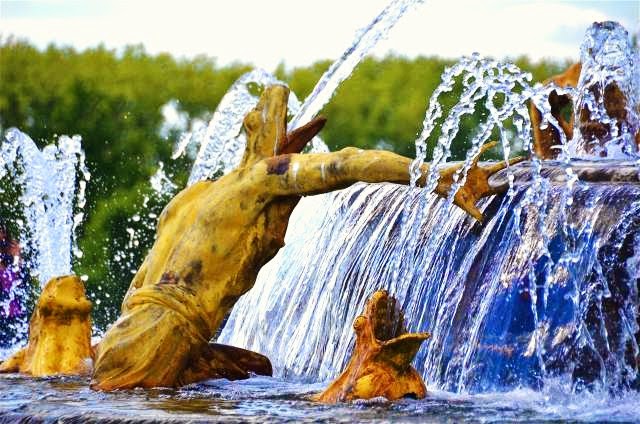 Régnier's "Water Feast" is obviously not concerned with the metamorphosis of peasants into frogs but it does culminate, in its last two tercets, into a quite different metamorphosis of subtle poetic power: the fountains, turned off at dusk and silent now, become the yews and cypress trees around, or perhaps their reflections in the mirror-like water of the large basin. The form of a cypress may resemble a water spout. 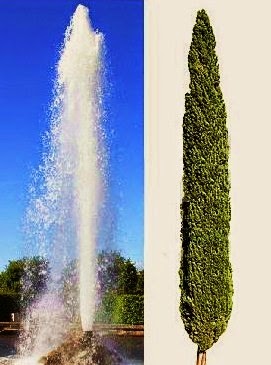 And I sincerely hope that my colleagues and students playing Jeux d’eau may not turn into frogs but soar up like a fountain! Because the most admirable metamorphosis without any doubt is the one in which Ravel turns water into sound or "liquid poetry" as Cortot may have said. If I had to find a word in Régnier’s poem that describes Ravel’s Jeux d’eau I would choose "irisant" (making iridescent: "Et la poussière humide irisant la statue" - "And the wet dust making the statue iridescent"; in my verse translation: "And watery dust dyes the monument’s neck").

As expected, one finds lots of wave like motion

and also arpeggios, sparkling texture and rapid figures "shooting up" like a fountain

but these alone do not explain the enchanting iridescence. Rapid figures could also express nervousness, drama, or perhaps just be virtuosic display. Technically there is nothing "new" about this, but in Jeux d’eau the figuration is always an agent of "color", of "exotic" harmony ("bitonality", major seventh, whole tone scales, pentatonic melodies, etc.). We do find "exotic" harmony in earlier composers, a lot in Chopin. But, especially with Chopin, "color" does not "play with itself" but is employed in the service of noble declamation. In Jeux d’eau the harmony shows almost no "direction" to a cadence (what could be the main leading note in a dominant eleventh?) and the pentatonic melody has no heroic intent whatsoever: "color" is liberated. Music becomes the selfless rhetoric of play—"the delightful and always novel pleasure of a useless occupation" ("le plaisir délicieux et toujours nouveau d’une occupation inutile" —Régnier).

In bars 13-16 the "water" gushes up to fortissimo and immediately settles into a plateau as if collected by a basin. 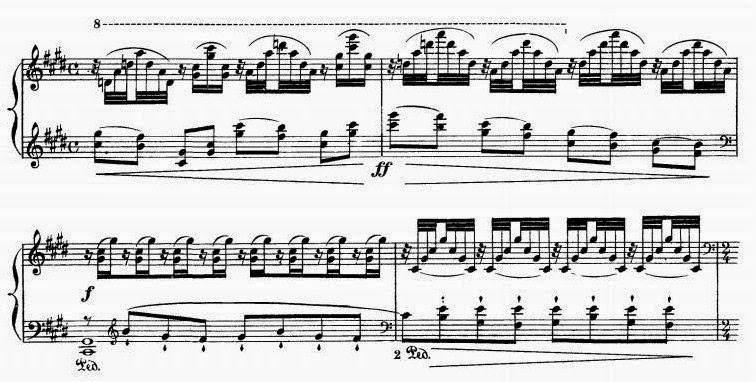 This "plateau" has three layers. There are even four layers (two in the lowest system) in bars 80-81:

The rapid motion of the high 64th-notes is compensated by the slow-moving pentatonic melody in the middle and the even slower bell sounds and organ point in the bass. We thus have calm amidst motion and this reminds me of another "fountain poem", the famous "Roman Fountain", 1882, by Conrad Ferdinand Meyer:

Up springs the spout and, falling, fills
To brim the marble basin’s round,
Which, under veiling, over-spills
Into a second basin's ground;
The second one, too rich now, runs
Into the third its falling waves,
And each one takes and gives at once
And streams and stays.

Rhythmically this poem is more energetic than Régnier's. The frequent enjambments, the "spilling over" from one verse line to the next, correspond to the basins' water spilling over into the lower one. The concluding line "and streams and stays" (und strömt und ruht") magically describes and expresses the "soul" of the fountain and it also describes the "soul" of Jeux d’eau. The music "changes and stays the same", one could add, as the same themes appear again and again, differently transformed.

Jeux d’eau’s sounds may emulate the iridescence and "useless" playfulness of a water feast; nevertheless it’s firm structure is rather architectural and reminds me of the "wedding-cake"-like Latona Fountain. The goddess is placed right in the center onto the top layer of the fountain, and right in the middle of the piece appears Jeux d’eau’s climax:

The build-up to this climax, starting at bar 38, corresponds in length to the "calming down" section leading into the "recapitulation" and the opening section to the final one (because of changes in meter and tempo, the actual length here cannot be measured by numbers of bars but only by performing time).


Here is the original sonnet by Henri de Régnier:

other translations by Rolf-Peter Wille